On January 21, 2017, the giant of 20th century Estonian folk music, composer VELJO TORMIS passed away at 86 years of age. Through the application of modernist compositional techniques to ancient folk song, his unique, magical and powerful choral invocations have left a huge cultural legacy and inspired many, not least of which includes the ensemble Kiri-uu.

Kiri-uu was a small choir formed in 1986 in Sydney by first generation expatriates Anni Meister and Olev Muska to explore modern Estonian folk song, particularly through the work of the neoclassically-influenced Tormis.

The word ‘Kiri-uu’ originates from Veljo’s arrangement of a lament in the form of a traditional Estonian swing song ‘The swing yearns for gifts’, for which the maestro - unable to find a suitable word from folklore and after much effort - uncharacteristically invented his own refrain. In far off Australia, such a choice of word for a band name seemed entirely accidental, yet it was this word that Veljo believed actually chose us: from amongst the rich collection of notation with which the esteemed composer had endowed us and upon which we commenced creating our own folksong variations, chanced the very word ‘Kiri-uu’.

On Kiri-uu’s amazing first concert tour of (Soviet) Estonia in 1989 and upon the tour’s ‘standing room only’ closing performance in Tallinn, we were greeted on the Estonia Concert Hall stage by Tormis himself - sauna pail and rowan branch in hand - proudly declaring to the audience: “Estonia has adopted you!”

After the choir’s disbandment in 1990, Kiri-uu has continued to evolve, having morphed into a ‘desktop a cappella’ duo consisting of Coralie Joyce and Olev and currently existing as a vehicle for some of Olev’s multimedia and re-mixing projects.

Veljo’s profound cultural intuition through music prevails as a beacon that shines far beyond his own lifetime and continues to inspire Kiri-uu and countless others. 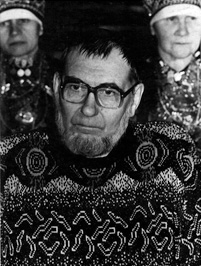